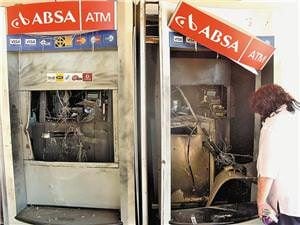 These two ATMs were bombed early on Thursday morning.

Both the Absa ATMs at the Glengarry Shopping Centre were bombed in the early hours of Thursday morning.

According to reports Vredekloof residents heard a loud bang at about 03:00 in the morning.

Captain FC van Wyk of the provincial police office said according to available information two security guards on duty at the ATMs, were approached by two unknown men at approximately 02:35.

“Both suspects were wearing balaclavas and were armed with firearms. They took the security guards (Korserv Security) to the basement of the shopping centre and tied them up with cable ties. According to the guards they heard four blasts not long after.”

He said a police vehicle patrolling the area were approached by staff working night shift at a retailer shop. They informed the police officials that they heard the blasts and then saw two men running across the parking area towards De Bron Road.

“It was then established by police that the two ATMs were bombed. They found the two security guards in the basement after they were heard shouting for help.”

According to Van Wyk the suspects did not get away with any money, as all the notes were dyed with blue ink.

“The financial institution installed a new device whereby a blue dye is released as soon as the first blast goes off, rendering the money useless. This dye was specifically installed to serve as a deterrent and to prevent perpetrators from getting away with any money.

“The spate of ATM bombings is worrisome to SAPS and every endeavor is made to apprehend those responsible. We once again want to warn ATM users to exercise caution when using these machines, especially during the early hours of the morning. Never challenge suspicious persons in the vicinity, they could be armed and dangerous,” said Van Wyk.

A charge of malicious damage to property by explosives is being investigated. Anyone with information about this incident can contact Crime Stop on 08600 10111.