It’s that time of the year again when the skies of Cape Town explode in a riot of colourful fireworks, the popping sounds of firecrackers echo through the suburbs – and animals run about in panic.

This year Diwali and Guy Fawkes fall on the same day – Friday 5 November – and the City of Cape Town is urging residents to be cautious and sensible when handling fireworks both on this day and New Year’s Eve.

The SPCA is also urging Capetonians to be considerate of the terrifying effects fireworks have on animals, and not to discharge any fireworks near them.

Diwali, or Deepavali, means ‘a row of lights’, and is a significant religious ritual for Hindus. Discharging fireworks is a tradition symbolising the victory of light over darkness and good over evil and follows a month-long fast and abstinence from meat and alcohol.

The Cape Town Diwali Festival to celebrate Hindu culture will be held at Ratanga Junction on Saturday 30 October.

Guy Fawkes Night, meanwhile, is an annual celebration marked by fireworks and bonfires around the world, commemorating the failure of the British Gunpowder Plot of 5 November 1605, in which Catholic conspirators, including Guy Fawkes, allegedly tried to blow up the British Houses of Parliament in London.

The City has identified eight designated areas across Cape Town (below) where shop-bought fireworks may be discharged. These areas will be patrolled by City fire safety inspectors and law enforcement officers as well as the SA Police Services, and there will be a zero-tolerance approach to those who discharge fireworks illegally.

In terms of the Explosives Act, Number 26 of 1956, and the City’s Community Safety Bylaw, the storage, sale and use of explosives is closely regulated.

All approved fireworks displays must be presented by licensed fireworks contractors, and members of the public attending these must follow safety instructions given to them. Those wanting to hold a public fireworks display must obtain a permit from the SAPS at least two weeks beforehand.

Fireworks can only be purchased from authorised dealers, who have the necessary permits to sell them. These must be in sealed packages, and cannot be sold to children under the age of 16. Children cannot handle or use fireworks unless under the supervision of an adult. Fireworks cannot be sold by informal traders. The City cannot be held liable for any injuries or damages that occur from the use of fireworks.

Meanwhile, the SPCA says the sound from fireworks is at least seven times louder to animals than it is to humans, due to their wider range of hearing. This causes animals to panic and they often injure themselves as they try to escape.

Cape of Good Hope SPCA spokesperson Sarah Scarth says that even if fireworks are only let off in designated areas, animals – particularly dogs and cats – are still affected as the sound carries.

She urged pet-owners to take adequate precautionary measures which include the following:

Scarth says the SPCA has seen a drop in the number of fireworks-related animal emergencies over the last few years, but they have noticed more stray animals being found during these festivities.

“Of the 30 calls the SPCA Inspectorate call centre handled on 5 November 2009, only eight required a call-out by an SPCA Inspector,” said SPCA Chief Inspector Andries Venter.

The designated fireworks areas are: 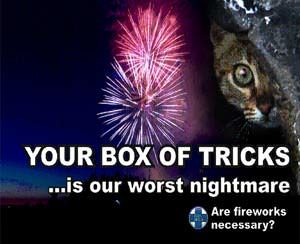 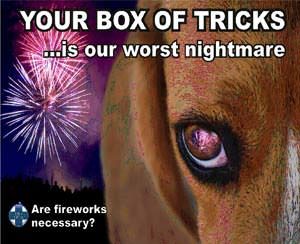